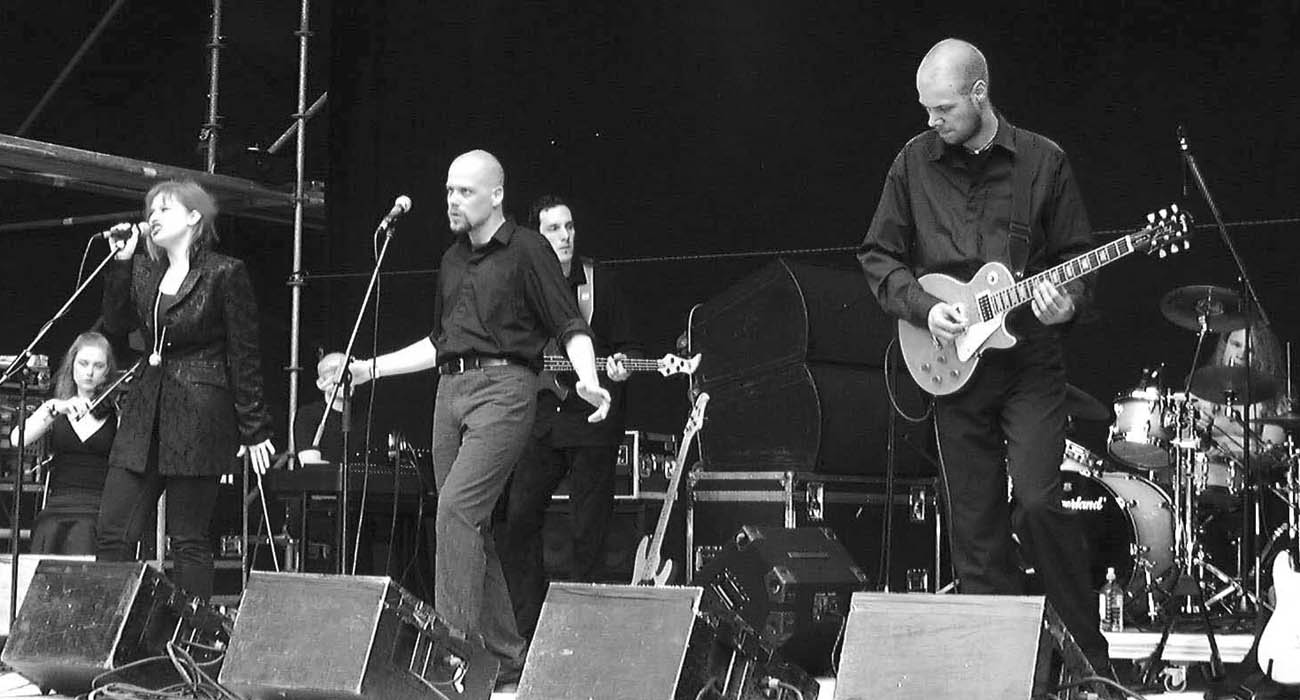 Of all the bands that I knew and loved playing the Wave Gotik Treffen festival, JANUS was one of those that I was anticipating most. On CD, JANUS had really grabbed my attention, both with their cool visuals in sense of package design but also in shear quality and complexity to the music. I wasn’t sure what their live set might by like as there was such diversity in terms of style and instruments from one track to the next on disc.

Up until JANUS went on stage, the day had been plagued with overcast sky and light showers but as they took the stage, the sky cleared and sun shown down upon us for the entire duration of the set. On stage JANUS consisted of Tobias Hahn on keyboards, RIG on vocals, a guitarist, bassist, live drummer (for the first time I found out later), a live cellist, and a live violinist. The strings add such a dynamic in the live situation, it was a full, and complex sound, fitting and comparable to their recorded sound.

RIG was animated and entertaining, bringing you into the emotional content of his vocals with his facial expressions and body language. RIG has excellent range as a vocalist, being able to alter from slow, emotional ballad to raging force on a beat. His appearance was strikingly similar to the stylized illustrations Oliver crafts for the album covers which brought a smile to my face. He captures the essence and mythos of JANUS just from a glance.

Tobias played his instruments with intent concentration, oblivious to his surroundings, making sure everything sounded as it should. The songs were even more powerful than on disc. The set opened with „Schwarze Witwer“, one of my favorite songs off of their first album, „Vater“. On „Meine Saitenspiel“, Sonja from L’ame Immortelle joined him for the female vocal parts which was an especially fine treat and a great performance. JANUS have songs that make you want to jump around and let out aggression but they also have beautiful, emotional songs that nearly bring a tear to my callous, cynical eye.

RIG continuously brought a smile to my face with his expressions and actions, drawing the entire audience into the performance, and captivating them with each song. Every lyric delivered had added strength and weight in the live setting. The string section added enormous impact and was particularly eye-drawing. The two talented musicians enhanced every song and made the sound very full and emotional. With every sound being generated live, the musicians were able to jam and add to each song, making it new and exciting but still keeping all the complexity and nuances of the original.

They played a great set, touching on all my favorites from both of their full-length releases. I was able to finally pick up both of the singles I was missing and picked up a cool shirt as well which is an added bonus as these items are extremely difficult if not impossible to find Stateside.