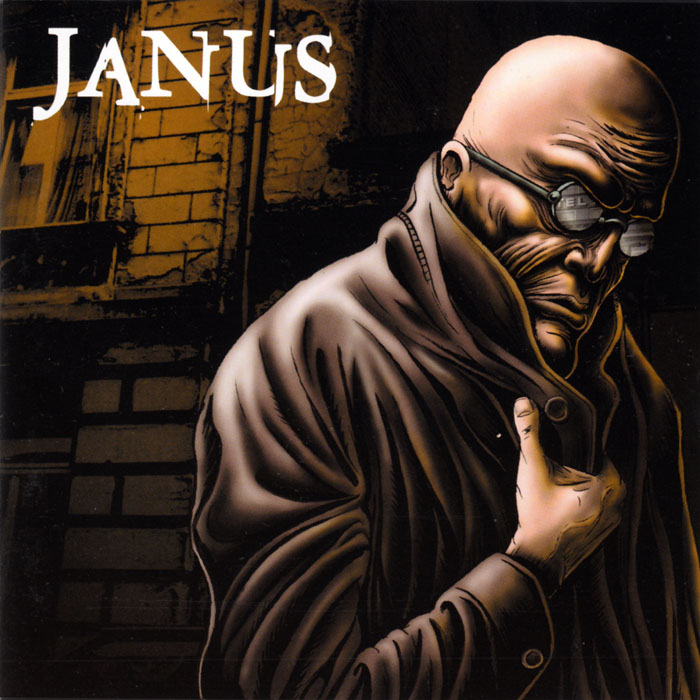 Just like for their first album „Vater“, Janus releases here a shorter companion to their second full length disc, „Schlafende Hunde“. 3 new tracks are to be found here, which are part of the story told in the album, as well as an early version of „Hotel Eden“ and remixes by Hau-jobb, Noyce TM & L’Ame Immortelle. „Schlafende Hunde“ was a surprising CD, that had not met all the expecta-tions one could have about this band after their incredible debut, and this „Hundstage“ could be considered as a way to confirm or deny the metal orientation of the band. And the conclusion is that Janus seem to have really de-cided to become another goth – metal act among plenty of others.

It all starts wirth „Bruderkuss“, a heavy, guitar-focused track that starts with a nice atmosphere built by the bass, before becoming plainier, with a somewhat melodramatic chorus. Almost nothing remains of the sublte industrial arrangements of „Vater“ here, but the accent is put on the pathos oriented guitars and violin. Not really a bad song, but nothing really more interesting than the other gothic / metal bands (including the exxagerated „Judas“ in the chorus).

The second track, „Kopf in Flammen“ has a really nice warm feeling but, like „Bruderkuss“ has a really disap-pointing chorus, with shouted vocals, short guitar riffs and classical fast drumming. This song has a fast tempo that doesn’t really fit its mood or the vocals (and the calm end seem really just „pasted“ on the rest), more laid back (which is quite clear during instrumental part in its middle). All in all, it sounds a bit clumsy and strangely written.

„Tag für Tag“ is by far the best of the three new songs. It has a nice introduction that, like a lot of others in „Schlafende Hunde“, has a small industrial / weird effect that contrast to the classic instrumentation of the first two tracks. Then, this is also the first piece on this CD that shows the subtility and ambience that have made me ap-preciate Janus so far. Free of the heavy guitars, RIG’s voice and texts can finally find its place, in a song that will remind the fans of a mix between „Knochenhaus“ and „Die Ballade von Jean Weiss“, with, as a welcome bonus, the magnificent voice of one of the two Janus female singer (not credited in the booklet). A very nice track, the kind of things I had hoped this CD would be full of.

Then comes the „retro“ version of „Hotel Eden“ (maybe a version taken from the band’s first demo), a song full of ultra classic rock structure with a prominent goth / metal guitar and an obvious drum machine. The chorus works well (but not as well as on the album’s version) but, gen-erally speaking, this looks like an attempt at mixing the dark metal things from Europe with more american in-dustrial rock, without success.

The first of the remix, done by Noyce TM is the once I liked the least. Basically, the band has taken the exact same structure and tempo as the original, but replaced the rock percussions by a Depeche Mode like 80’s beat… The „disco“ version of „Bruderkuss“ by L’Ame Immortelle is also free of guitars, replaced by a mid paced electro tune enriched by the usual L’Ame Immortelle bombastic chorus. Better than the remix by Noyce TM’s, this is clearly directed to clubs, but the strange synchronisation between the voice and the music during the verse might prevent the track from being really efficient. Finally comes an apoplogy with the „psycho“ version of Veronica by Haujobb, an impressive, beautiful and innovative trip-hop version of „Schlafende Hunde“’s slow. This time, everything is re-worked, and one can hear the work done on the song. Truely a good re-construction.

It seems that my hopes to see JANUS be the band that would finally bring together an innovative and competent music with the emotions of dark wave are to be denied by the resolute plainer gothic / metal orientation of the band. Two tracks that I liked on this CD were for sure a big disappointement for me. JANUS will for sure seduce the crowds in german dark clubs, but I still think they should be more ambitious than this, and that they can do far better.