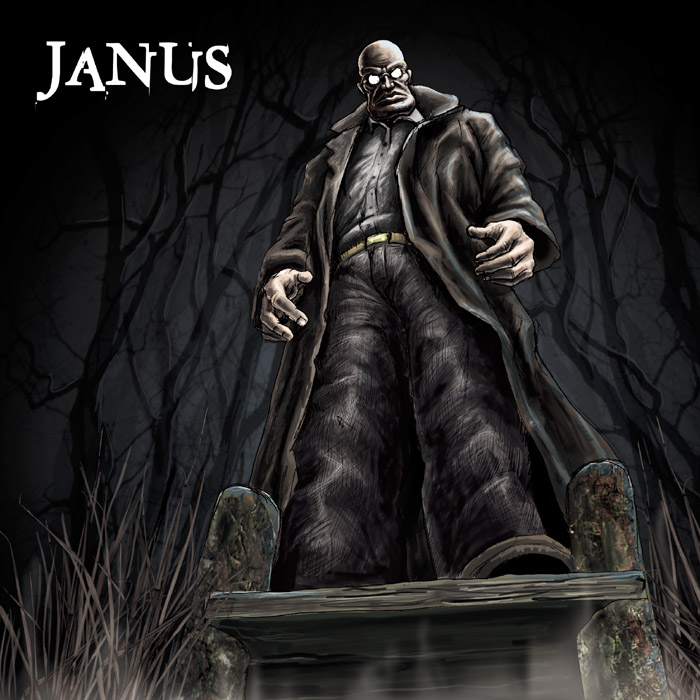 JANUS clearly one of the most impressive new-bands to have emerged out of the dark wave scene during the last couple of years, are finally back with „Schlafende Hunde“, their second CD, already released as a demo a long time ago.

Like „Vater“, this album is a massive piece of work, both lyrically and musically, that revolves around a central theme, here the story of the relations between two brothers and a call girl loved by both. but rather than giving a general description of the whole CD, which is very different from „Vater“, let’s describe all the songs.

It all starts with „Kommt herunter“, a calm but infinitely melancholic piece, sung by the duo RIG/Patricia Schwan. Served by a beautiful piano, this piece is a very good prolog that will bring you tears at every listening.

„Rorschach“ shows you the major difference between „Vater“ and „Schlafende Hunde“: the guitars. They are far more present than on the first album, and are also heavy. In consequence, the structure of the tracks have gained in classicism, being more written on a plain rock scheme than before. Anyway, fast and quite furious, this song is also typically Janus, which means excellent. Very well produced, and beneficing from a great anthem, this is clearly one of my favorite tracks of the album. But be warned, JANUS go guitars!

„Gescheitert“ starts in with very NIN-ian dubbed percussions and vocals, with a soft string melody. RIG’s voice, both deep and emotional, fits very well a mid-tempo music, nostalgic and reminding a bit of the track „Lolita“ from „Vater“. The lyrics, which seem to me longer than opn the first CD, are, like on almost all the CD, directed toward the girl of the CD. At one point appear in the song the arabic percussions and melodies that were already present on „Vater“ and add a lot of originality to Janus’s sound (just like the closing cold cello). The guitars are not too much present on this track, but a very melodramatic chorus at the end of the track adds to the rock-opera / progressive rock feel of the CD. Great if you like „The Wall“ or Queensryche kind of music (or easier, think of Lacrimosa), it also makes JANUS feel a bit more theatrical than before, but also more mainstream.

„Unter dem Eis“ is the last track of the first part of the CD, and as a drumming than reminds a bit of „Kommt Herunter“. The song starts slowly, with an almost whispered voice and a distant melodic guitar. At one point come back darker, almost shouted vocals, that introduces a lyrical guitar supported by a very dramatic drumming. Once again, the song evolves between a dark progressive and mainstream rock and something that would be more drum-based and industrial. The voice of Patricia Schwan makes a short appearance toward the end, but with very „cut“ verses that don’t give her the opportunity to show her talent.

„Mein Krankes Herz“ starts with a heavy metal guitar that stays very present throught the whole song. The drumming is also very classic, and the track gains its originality and power from the dramatic lyrics and a nice violin. Even though it stays a good song, the heaviness of the guitars will probably shock thoe of you who don’t consider JANUS as a metal band.

„Das Fest“ starts with a sad drumming mixed with a kind of circus music quickly replaced by guitars (reminding again of Lacrimosa). RIG’s voice is angry and threatening, but gets almost „loving“ and calmer when the guitars lets room to a soft drumming. Really menacing from time to time, the songs gets richer when a very nice drumming introduces the second half of the second. RIG’s voice manages to be really catchy but works best with the violins that with the guitars. Anyway, this is a complex and contrasted songs, alternating between very nicely done soft moments and rawer, rockier passages.

„Reptil“ is probably the most industrial track of the CD. It starts with statics and a distorted background. The mood of the songs stays approprietly cold, supported by a very nice set of percussions and a distant strings and horns melodies. In a way, this is also the song that sounds the closest to „Vater“. Slow and hesitating between threat and love, the voice fits very well the rest of the song. A nice innovation takes the form of a vocoded voice. Probably the most original song of the album and one of the nicest.

„Hotel Eden“ is very different. Its short guitar riffs, the rough and almost spoken voice and the more lyrical choruses makes me think a lot of Tanzwut. This impression is even reinforced by the heaviness of the accoustic percussions. A short, quite efficient, „Neue Deutsche Harte“ track.

„Verflucht“ starts once again with a very electronic drumming accelerating and being little by little replaced by guitars and a classicer structure. The fast chorus is quite fast, relying mostly on the dubbed voice. The song is slowler and more contrasted than „Hotel Eden“, but also maybe less catchy. The ending gets more violent and more metal oriented.

„Veronica“ is the softest song of the CD. Patricia Schwan is alone at the mic and a music made of african percussions and an accoustic guitar supports very well her love/scorn vocals. Very emotional, the song is also full of reverb, which gives a very ample dimension to the sound, but also makes it very poppy. Sad, moving, very well written, this is however definitely the „slow“ of the CD.

„Klotz am Bein“ starts with a typical Bon Jovi-esque guitar solo which ruins the track from the beginning by giving it a complete melodramatic soft rock feeling. This is really too bad, since the first half of the song, with RIG’s soft voice over a slow almost jazzy instrumentation works very well. The second half of the song, however, falls in an aggressive heavy metal track, with typical guitar breaks and shouted vocals. This might be the most aggressive track of the CD, but it is also the one on which the new metal direction of JANUS works the worst.

„Schlafe Gut“ is a soft ending that suffer from being the sequel to „Klotz am Bein“. Although it features some nice strings, it is also a really rocky piece that, once again, contains a (terrible) guitar solo.

Beginning stronger than it ends, „Schlafende Hunde“ is a contrasted and surprising CD. Since „Vater“ has completely seduced me, I had big expectations about this new CD, and I have to admit that the rock’n’roll metal direction of JANUS took me by surprise. Even though the lyrics, the production and the programming are still really great, the rock structure and the metal guitars make this CD sounds plainer and don’t show as much originality as „Vater“ (which sounded more freed from any style).

Easier to listen to but maybe easier to compare to other artists, „Schlafende Hunde“ contains extremely addictive songs („Kommt herunter“, „Rorschach“, „Reptil“, „Veronica“) and other that I didn’t like that much. It’s a good CD but not one that I’ll still listen to in 5 years, like its predecessor. JANUS have gone guitars, who knows what they will do next time.